Welcome to our first Northeast Fly Fishing Report of the season! Over the course of the next 8 months we’ll be sending out weekly reports covering freshwater and saltwater fly fishing in New England and New York (and occasionally, a few parts just to the south). Check back in frequently to get the latest word on what’s hot and what’s not! Much of this information is provided by friends of the Compleat Angler (including Len, our roving correspondent) as well as many guides. If you are thinking of booking some time on the water this season we encourage you to reach out to some of those mentioned here. They are true pros and will take good care of you.

This week we're focusing on southern New England since that's where the action is and headline thus far is that the fishing is starting to round into form, with all of the caveats that go with the early part of the season. In Connecticut and New York the fishing is starting to heat up and the action should roll slowly northward as the weather improves. Snowmelt and spring rains have bounced around water levels on many trout streams, so paying attention to stream flows is a must this time of year. Where possible we’ve included flow graphs for the rivers mentioned here.

Saltwater anglers are still patiently awaiting for the major migrations and it will be some time yet, though resident fish can still be found in a few areas. We’ve started to see stripers showing up in estuaries around Long Island sound, for example, a harbinger of things to come. When the action heats up we’ll be including more saltwater locations, so stay tuned.

At this point MassWildlife has stocked nearly all of the locations on their list, which anglers were able to follow with this helpful map that they put out (it was/is updated in real time). So at this point the fish are out there, it’s mostly a matter of keeping an eye on the weather and streamflows, especially in the western part of the state where snows melt a little later. It’s nymphs and streamers this time of year and bring a wading staff. Eric Gass, of GSOutfitters, reports that the Deerfield has been fishing pretty well despite cooler water temps (high 30’s, low 40’s) from a bit of rain and snowmelt. The closer to a tailwater dam on release water the better the odds. Anglers have been doing well nymphing with big heavy nymphs and have been producing some great browns. The state stocked rainbows are starting to show up as well. As always on the Deerfield, keep your eyes on the water flows as levels can fluctuate pretty substantially (here is a link to the water release schedule at Fife Brook). If water level are high on the main part of the deerfield, you can always take a look at some of the smaller feeders which tend not to be so turbid in high water. It’s also a great time of year to get on Eric’s calendar as the next two months should be prime time. Floating the upper deerfield is one of the best trout experiences in New England, no question. 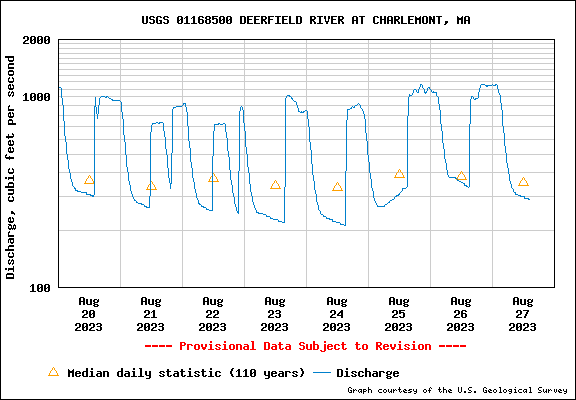 Tomorrow is opening day for trout fishing in Rhode Island, and many anglers will be shaking off rust and getting out there. Expect some crowds this weekend and higher water thanks to a few days of rain this week. The trout fishing across the state has been incredible as of late and is only getting better as the water warms up. Everything from small streams to the larger tail waters and rivers are on fire. Very close to the shop we have the Mill, Mianus, Saugatuck and Norwalk Rivers. All of which have seen a great Stonefly hatch this season which will continue for the next few weeks. Hungry fish will be rising on these Stones later in the day and plan on fast and furious action once these fish key in on them

Nymphing remains the most consistent way to catch these fish. Standard patterns such as Pheasant Tails and Hares Ear nymphs will certainly produce fish however, dropping down in size is advantageous. Size 18 or smaller will increase your chances of catching some of those bigger fish and I have had great success with zebra midges in a size 20.

Our larger rivers are beginning to come to life as well. The Farmington has been stocked and is warming up a little more each day. If you find those pockets of freshly stocked fish expect a continuously bent rod. These fish will be far less selective and if you switch flies regularly you will do very well. The larger fish in the Farmington are still a bit sluggish but my no means uncatchable. As the water warms throughout the day, tight line tactics can be productive. Focus on those slower deeper runs where have been fish holding during the winter. Most of these larger Browns will still be hunkered down in those deep holes but will still actively feed throughout the day.

The Housatonic has been tough this spring. No surprise there. Chronically high water levels have kept most anglers off the river with the exception of a few anglers in drift boats. Trout remain elusive with our guides reporting a few follows on streamers but sporadic action at best. There have been some large Smallmouth caught on the Housy recently however. Streamers thrown on sinking lines have produced some nice fish and as the water warms expect the trout to turn on as well (provided the water comes down).

This Saturday (4/13) is opening day! This means that all legally fishable rivers will be open to anglers! You have ever fished opening day you know it can be an absolute circus out there. To many spin anglers this means it’s time to kill trout. Every angler with worms and power bait will descend on your favorite river and clean it out. Yes, this is the sad reality of many fisheries nationwide. However, Opening day offers a great opportunity to fish lesser known rivers. Many of the smaller streams throughout the state get little to no pressure and hold beautiful wild fish. Browns and Brookies can be found in surprising numbers if you know where to look. I would highly recommend (if you plan on fishing this Saturday) exploring some new water and avoiding any TMA. Any stream associated with a reservoir or altitude is a good place to start looking. Make sure it is legal to fish and bring a little bit of everything in terms of flies. You may just find a gem of a river and more often than not, you will have it all to yourself. It has started! The Stripers have begun to show themselves to those willing to put the time in. The Striped Bass have begun to shake off the Winter chill and move out of their wintering holes. The mouth of the Housatonic has begun to fish well with plenty of fish being caught. This is one of the best opportunities to catch these fish from shore and if you time it right, expect the best shore-based fishing all year. There are mostly schoolie sized fish around but some nicer fish in the 30”range have been mixed in. It is only a matter of time before the big girls show up. They will pop up sooner than you may think so it’s time to get out there! We have a great tide associated with a full moon coming up and that will be the first real shot at catching some bigger fish on the fly. I know I’ll be on the water and you should consider it as well.

The Catskills have are starting to heat up. The fishing has been inconsistent on the Delaware but on the warmer days fish have been caught fairly regularly. On dries, as well! Blue Winged Olives and Blue Quills have been appearing and fish are keying in on them. We also have Hendricksons right around the corner and with the mild winter we had, they could pop up sooner than usual. Streamers have taken their fair share fish but the action has been hit or miss. In smaller rivers such as the Beaverkill or Willowemoc, streamers and nymphs have been deadly. The fishing has been very good as these rivers will warm up faster than the Delaware system. High water has proved challenging but if you put in the time, the fishing this time of year can be phenomenal.

Numerous streams throughout the state have been stocked since opening day and will continue to be throughout the spring. This provides for some great angling that will typically last longer than most of the stocked streams in Connecticut. When many of the CT streams are fished out by bait anglers, the New York streams will still fish very well. With higher water this week many of the smaller streams have been blown out however, they tend to go up fast and fall fast. Depending on the weather this week, we could see great water levels in a few days. A size 18 black Stonefly nymph is the go-to fly this time of year. That being said, smaller steamers and midges will catch their fair share of fish.

The Striper fishing has been picking up recently! Down toward New York the action has been constant. Turtle Cove at the mouth of the Hutchison River has produced the most consistent bite as of late however, those fish will work East in a hurry. Big breeding females will start to work their way into the Hudson to spawn and if you are able to intercept them, you can get locked into some seriously big fish. The next few weeks should see the bite really turn on and improve throughout May.